We’re sitting on a bus travelling from Mersing to Melaka, from the East coast to the West, through thousands of acres of palm trees (used for palm oil). It’s going to take about 4 hours so I thought I’d use the time to catch up on the blog!

We arrived in Johor Bharu after a 20 minute bus trip over a causeway from Singapore. It amazes me how close Singapore is to both Indonesia and Malaysia, you could literally row a boat between them. Of course, it was Chinese New Years Eve, so we found ourselves at a hotel on the outskirts of JB with practically everything closed for at least the next four days. Luckily some of the many restaurants that were around stayed open, and we found a great little restaurant that we ate breakfast at every day. Ash and I are now addicted to the “Kopi Panas” which is hot coffee and condensed milk (if you think that sounds like it would be really sweet, you’re right!) and “Roti Telur” which is roti bread with an egg inside. Cameron’s been eating rice and iced water for breakfast, which he seems perfectly happy with, and Lachie has been having rice with a curry sauce and hot milo!

Since there wasn’t much to do we took the opportunity to catch up on the school work. We hadn’t done too badly with getting some work done in Singapore but we were falling behind a bit. The boys have been really good with doing it, considering we have to do it wherever we can! In this case it was in the hotel lobby, the room and outside, which worked pretty well.

It hasn’t all been work though! We all had a great time at Legoland Malaysia, on the outskirts of JB. It cost a bit to get in but it was very, very good. We were there from 11am to 7pm (closing time) and went on almost every ride at least twice. What they’ve done with the Lego is fantastic, and of course all of the rides relate to Lego somehow (one of the roller coasters had Lego cars to sit in).

We ended up staying in JB for 5 days, and took a bus over to Mersing. I have to say that the bus driver we have right now is pretty good, but the driver on the way to Mersing was crazy! Cameron ended up throwing up after we got off, poor thing, we were going so fast around the bends. And I really don’t like it when the driver is chatting on his mobile and driving with one hand as he hoons around! Taxi drivers don’t seem to stick to traffic signals or speed limits either. Aaaaaanyhooooo, we got to Mersing safely and checked into our hotel. We’ve noticed since arriving in Malaysia that 1. booking over the internet is not the best way to make arrangements and 2. Malaysians don’t necessarily believe in maintenance! Both the hotels have had leaking showers, which is a problem when the shower is a small hot water system on the wall with a hand-held rose and the toilet is right next to it (nothing like getting a wet bum whenever you go!). Everywhere we look the buildings have been built and then left, with the exception of new shops on the ground floor sometimes (they’re all double storey with the top sometimes being living quarters). Even on the web reviews of accommodation, which we’ve been looking at for deciding where to go next, time and time again complaints come up about the standard of cleanliness and maintenance issues. There certainly is a difference between what you get for your money here and what you get in somewhere like Vietnam, it’s more expensive than what we thought (but not like Singapore though!). It's amazing how quickly you adjust to circumstances though, we found ourselves getting used to being there after a few days. Bathroom and room photos of JB hotel, courtesy of Cameron!

The river at Mersing is nice, and the boys have been fascinated by the cats that run freely everywhere. People eat lunch in the restaurants with a cat sitting next to them, of course Lachie wanted to take a kitten that we saw home and we had to explain why that wasn’t going to work out!

We came over to Mersing with the intention of catching a ferry over to Tioman Island, which is apparently a little tropical island with places to stay, snorkelling to do etc. After studying various reviews of the accommodation we weren’t too sure (and we don’t really trust the pretty pictures that people show us). We then spoke to a French couple and asked them about where they stayed. It sounded good so we tried to make a booking but it didn’t work out (long story). So we’ve booked a few nights at a hotel in Melaka (let’s see how this one turns out!) and we’d like to stay there for a while if we like it. By all accounts it sounds very good, and it would be nice to plonk in one place for a bit! We’re almost there, next post again soon!

So we arrived in Singapore after a great flight. It took about 8 hours to get here but the boys were great (thanks Qantas on-flight entertainment!).

If we thought we were going to have a rest once we got over here we were sorely mistaken! We've been flat out seeing the sights, but that's because we know we're only here for a short time (it's too expensive to stay for too long, especially on a budget that needs to be stretched!), and there's a lot to see!. We found a great hostel, The Pines Hostel, which is in a great location and near the metro subway system. And what a great subway system it is, we travelled all over the place on it. Cheap, reliable and frequent, awesome!

So, for the 6 days we've been in Singa we've:
made some lolly friends at Sentosa Island,

and some butterfly friends too.

We've looked at some beautiful gardens at "Gardens By the Bay", all under cover in a huge glass dome of course!

and checked out Little India, and China town, which was super busy because the Chinese New Year's Eve was in 2 nights! The atmosphere was fantastic, and there were red and gold decorations everywhere, and mandarines (they represent gold and therefore prosperity for the new year. There were slabs and slabs of mandarines being sold in every supermarket we saw, at about SG$25 per slab).

Lachie and I checked out the Night Safari at the Singapore Zoo, especially designed for people to see the nocturnal animals. It was very cool to walk around in the dark and see the night animals going about their business! Lachie loves zoos, so this was a highlight for him.

We also visited the fantastic National Museum. We came out with a new appreciation for where Singapore is at now, after seeing what it has gone through as a country over the past 100 years. We really didn't understand what had happened to them during World War 2, and we only got a glimpse, but it made us understand Singapore a lot more.

Lachie became acquainted with the 5 original Kings of Singapore

and the boys had a go at cooking some of the more famous local cuisines.......

So we only spent 6 days in Singa, but we got to see a lot and we really liked what we saw. It's really easy and cheap to get around, it's clean, and there's a great range of food because of the different cultures living there. Recommend it to anyone!

Next destination - Johor Baru, Malaysia. We crossed the single causeway that links the two countries on a bus, and began our exploration of Peninsula Malaysia. That's some photos for the next blog!

To our friends and family the decision to do this might have seemed to happen all of a sudden, but in fact this idea has been brewing (in one form or another) for a while now. Ash and I have always loved travelling, and love the idea of staying in an area long enough to actually learn about the culture of the country, rather than just getting a fleeting glimpse. We're especially keen for our kids to have this exposure. Doing this trip has been extremely opportunistic, there were lots of reasons to go ahead, it just seemed to be the right time! So the Tolliday Travels began (or arrangements for them at least!)

Once we actually made the decision everything started to roll along fairly quickly:

We had to sift through all of our belongings and work out what to bring with us, what to give away and what to store.

With the help of the boys of course!

We had to pack everything left into a storage container (and it only just fitted!). It's amazing how much "stuff" gets accumulated over the years, it was great to actually do a thorough clean out!

In amongst getting the house sorted out we needed to remember to plan for the trip (it was so easy to get side-tracked with packing the house!), including testing out the backpacks that the boys were going to use.

And so, after a crazy amount of thinking, planning, organising, packing, and trying to think of every possible eventuality that we might need to make arrangements for, we began our big adventure on the 12th February, taking off to Singapore! We could never have done this without the help of all our family and friends, thank you so much! 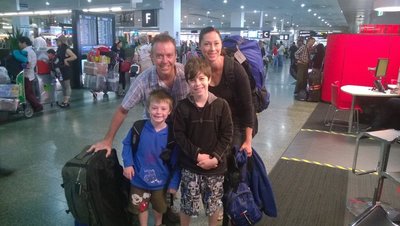 The funny thing is, with all of this thinking, planning and organising that we've been doing, not very much has gone into what we're actually going to do or where we're going to go on this trip. We have a rough itinerary of starting in Singapore, then heading north through Malaysia, then Bangkok, Cambodia and Vietnam. After that, we're thinking of a visit to Japan and China will be really good, but we'll see where our travels take us!