The month we’ve had in Cambodia has passed very quickly, and we’ve enjoyed it very much. Ash and I both feel very comfortable here, but we also agree that it has shown us how much we take what we consider to be the basic things for granted. Life here is not easy for most people, it’s a struggle to get work and earn enough money to pay for your families needs. Along the way we met so many parents who worked extra jobs for their children to go to school, and who are paying a lot of money (comparatively) for their children to learn English so they can get a better job and have better lives. I had a brief chat with a tuk tuk driver in Sihanoukville who turned out to be a Geography teacher in a Khmer school but drove tuk tuks at night for extra money. We’ve met young people who are working two jobs so they can support their elderly parents, because they can’t work and there are no pensions here. There's nothing like travelling to make you appreciate what you've got at home.

We reached Ho Chi Minh, after a 7 hour bus ride and relatively painless crossing of the border. We thought we'd be crossing the Mekong via a ferry, but it turns out the Japanese had very kindly provided US$100 million to Cambodia to build a bridge, which had only opened 3 days earlier! (photo below) We actually hadn't booked any accommodation, but someone met us once we got off the bus at Pham Ngu Lao and took us to a hotel nearby which we stayed in for 2 nights. We've discovered a great network of little laneways off the crazy main street (honestly, the traffic is insane) with the skinniest buildings we've ever seen. We looked around for some more accommodation and found the Blue River Hotel, still in the network of laneways) which we booked for a week. Thank God, because the last night we stayed at the first place we were kept up practically all night, first by Vietnamese karaoke (reeeeaaaaally bad) then a brass band that started at 5 in the morning for a funeral! Holy moly.

We've been here for 5 days so far and have done a bit of looking around, trying to time our outings around the really hot weather. We did a bit of a tour around the city on a cyclo (sick-lo), which is a traditional Vietnamese way of getting around consisting of a bicycle and a seat at the front. It was great to get our bearings, but a bit hair-raising when you've got motorbikes, cars and buses going every which-way! Ash and I have noticed how much things have changed since we were here 11 years ago, there's been a huge increase in development and the amount of money put into infrastructure.

A great example of this is the National War Museum. Eleven years ago, it was a small building with a very small outdoor area filled with a helicopter, guns and other war relics. Now, it's a three storey purpose-built building with a whole separate display outside of helicopters, jets, tanks, and a replica of the outdoor torture area used by the Americans to hold captured Viet Cong. It's a really good museum but oh so very confronting, full of photos and descriptions of things done to the Vietnamese by the Americans (no mention of the Australians or New Zealanders thank goodness or what the North Vietnamese Army did to Southern Vietnamese and other prisoners of war) and the impacts of Agent Orange which are still being felt even today. Very, very sad, and particularly relevant since it's the 40th anniversary of the end of the Vietnam War on 30 April (or, as they say here, liberation from the Americans), which is something that is a big deal here judging by the number of banners and ad boards the Government has put up around the city.

With the intention of showing the boys a bit of Vietnamese culture, we went to the Saigon Opera House and watched the AO Show (standing for Aaaaah and Oooooh Show), which was brilliant. It was a group of young dancers/acrobats that did lots of short scenes showing the different aspects to Vietnamese culture, from living in the country to the craziness of living in the city. They used bamboo sticks and poles, and grass baskets of different sizes to do amazing acrobatics, dancing and contortionism.

In amongst all of this Lachlan turned 10, no more single digits! What a place to have a birthday in! We had a little party at the hotel (thanks to the great staff here!), and managed to find a couple of very small presents (no big ones since we'll have to carry them). It was a bit low key, but today we went to the Dam Sen Water Park for the day, so the boys still got their excitement! No photos unfortunately, since we couldn't carry the phone with us, but suffice to say there were lots of water slides and pools to keep us happy for a few hours!

The plan is to stay here for a few more days and go to the ANZAC service here on the 25th. It'll be great to be somewhere for the memorial where Aussies actually fought. Other than that there's nothing else planned, wait until our next instalment!

It's been a while since our last blog but we're back! : )

We can't believe we've left Sihanoukville - and to top it off we're staying in the same street in Phnom Penh as before which adds to the surreal feeling. It’s been fun, interesting and relaxing! Our Cambodian VISA expires on the 20th April (Happy Birthday Trev!) we caught a minibus back to Phnom Penh today (14th) and will stay here until the 18th April. Then we'll catch a bus to Ho Chi Minh, Vietnam.

It’s Khmer New Year, which lasts officially for 3 days (so pretty much the whole week), and which is a big deal for the Khmer people. Lots of festivities including fireworks, families having picnics on the beach (at Sihanoukville at least) and people throwing water at each other in the street (mental note to leave electronics out of our day packs). On the way back to Phnom Penh we saw decorations made out of palm leaves, fruit and balloons on the porches of the homes, very colourful!

Our first impression of Sihanoukville was that it was really touristy and we were quite disappointed about that, but we've left today feeling quite sad to go because we've had such a great time.

We have had a good catch-up with Gordy (Ash's Uncle) while we have been here and seen a lot of places with him – including a great little bar called Purple overlooking the Serendipity beach and another hotel called Charlie Harpers. We've met so many people while we've been here, the crowd at Charlie Harpers like Lin, Linda and Jamie, and the staff at the Reef Resort like Neang and Thea. Gordy introduced us to his Tuk Tuk (actually Remork in Cambodia) driver Sopheack, and he's done a great job driving us around to various places. 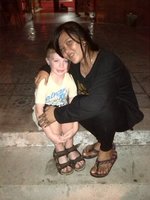 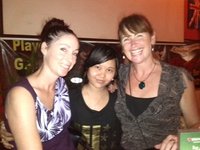 On 7 April, we took a one day Suntours Cambodia cruise out to the west of Sihanoukville. We cruised pass Koh Dek Koul which is a little rocky island where you can stay for $2000-3000 per night, and only if you're Russian! The Russians have a strong presence here, especially the Russian Mafia! We stopped for some snorkelling at Koh Tas and then went to Koh Rong Samloem and anchored at Saracen Bay. There are beach bungalows to stay in and an island setting just like all those paradise type photos you see. We agreed that a trip back here was definitely on the cards. Some notable achievements from the boys included Cameron and his snorkling (he took to it like a natural), Lachlan’s jump from the third deck of the boat into the water, Cameron’s from the second deck, and Lachlan swimming with Dad from the beach to the boat. We've certainly seen the boys swimming confidence and abilities approve from so much pool time! Of course, the day was finished off by a lovely drink watching the sun set at the Queenco Casino!

On 10 April, we took a Tuk Tuk tour with Sopheak around Sihanoukville to visit the various beaches that make up this place. Our first stop was Otres Beach, which is a popular backpacker hangout with beautiful beaches and is a place where you do nothing but relax. We travelled to Wat Leu (on top of a hill overlooking Sihanoukville so it gave us great views!) followed by lunch on Independence Beach, and we mean that literally because the restaurants are right down on the beach.

So we've had a great mix of seeing the sights and relaxing. The boys have made some excellent progress through schoolwork and we now have a good pack of work to send back home. Good work boys! We'll be in Phnom Penh until Saturday then it's time for a 7 hour bus ride to Ho Chi Minh, big day!